Dice Rooms are special rooms that can randomize many elements of the run. Dice Rooms require two keys to be opened, unlike most other special rooms. For a Dice Room to spawn, two things must happen; 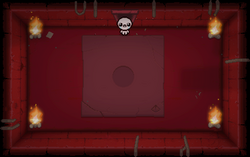 In addition to whatever else the room holds, there will always be a symbol of one of the sides of a die in the 5x5 center of the room. The amount of pips shown will be between one to six, chosen randomly. When Isaac crosses the Dice, a certain effect will occur that randomizes a certain aspect of the run, dependent on how many pips were on the die face shown. Any given Dice Room can only give this effect once.

The dice numbers and effects are:

The following room maps were made using Basement Renovator for cleaner viewing. Note that any pickups in the 5×5 center of the room will be on the die symbol, requiring Isaac to activate the room in order to obtain them unless he knocks them away with explosions of some kind. Given how hazardous some dice room effects can be, this may be the preferred way of retrieving them.

PC Q3TZ WQLG (Three 5-pip rooms. Two on the second floor, one in Utero 2. If played with The D6, can become Lord of the Flies and Guppy. Very good run.)