Binding of Isaac: Rebirth Wiki
Register
Don't have an account?
Sign In
Advertisement
in: Modified in Repentance, Added in Afterbirth+, Bosses,
and 3 more
English 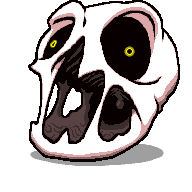 Delirium is a boss added in The Binding of Isaac: Afterbirth †. It is the main boss of

The Void and the final boss of Ending 20.

Delirium's main form is stationary but teleports erratically around the room and performs the following attacks:

Upon defeat, the screen starts to glitch, fills with static, and the room switches between different environments, while short scenes from the current run are played ending with Delirium screaming and bursting into a small puddle of blood.

Delirium only has damage scaling while transformed, not while in its main form.