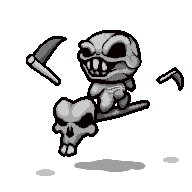 After enough damage is dealt, Death will dismount from his horse. The horse has 150 HP, but it will also lose health when Death is damaged. Attacking the horse does not damage Death.

Both Death and his horse deal a whole heart of contact damage in both phases.

Kamikaze Leeches instead of homing Death Scythes and does not use the Hourglass. He spawns

Red Maws rather than Knights after he dismounts from his horse.