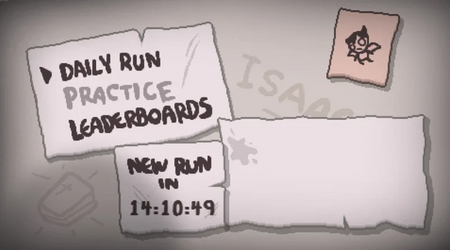 The daily challenge (or daily run) is a unique run generated every day. Daily Challenges were introduced in The Binding of Isaac: Afterbirth. Daily challenges start the player off with a specific character, seed, end-stage, difficulty and set of starting items. The player is scored and placed on a global leaderboard after ending the run. The run can only be played once per day, but an unscored practice run is unlocked afterward, which is identical to the Daily Run but can be played multiple times. Unlike regular runs, the Daily Run cannot be continued; exiting the Daily Run will end it and disallow further progress.

All unlockables are available during daily challenges (the game acts as if full game completion was attained for this save file). Daily runs cannot be played if mods or the debug console are active. However, mods can be used on practice runs, after finishing a daily run for that day. Finally, achievements are disabled during daily challenges.

Items with the nodaily item tag cannot be found during Daily Challenges.

Score plays a bigger role in daily challenges, as the player is ranked in the leaderboards by their score. Having a strategy that accounts for how the score is handled is important in achieving an optimal score.

Below is a list of all the starting points for each character.

The final score is calculated based on several bonuses and a few penalties:

Stage bonus is pretty straightforward: a fixed value given to each floor you reach. To reach a floor, you need to clear the previous one. Stage bonus is immune to floor restarts (ie: when using

Forget Me Now or a 5-pips

* The Chest and The Dark Room will not yield any "floor bonuses" by themselves, but you do get 4,000 points for killing Satan or Isaac, or otherwise reaching the 11th floor

Therefore, by reaching these floors, the total Stage bonus gained is as follows:

Each room will have its visited and cleared bonus value assigned according to its type and size, with 2x1 and 2x2 rooms accounting for twice the bonuses for visiting and clearing.

Rooms will default to 10 points for visiting and 40 for clearing if not stated otherwise.

Red Rooms are worth the same amount as the type of room that they generate as. The table below accounts for the size of

Black Market rooms, the reader should take care not to double these values again.

If Greed is inside, the shop is considered a mini-boss room and worth 70 points for clearing instead of 40

Killing enemies will add to your exploration bonus - roughly 10 points for each killed enemy. The following formula applies to most enemies that spawn on room entry:

According to the formula, a single enemy in a room is worth 5 points; 2 enemies are worth 6 points each; 5 enemies 7 points each and so on. Only enemies that spawn on room entry are worth points and count towards the number of enemies in the room, this makes enemies in

Boss Rush and those spawned by other enemies worth no points.

Sacrifice Room spikes or by blowing up angel statues will grant 300 points each.

Schwag bonus depends on the raw amount of pickups you collected throughout the run; it has an upper limit and it's tied to the item penalty. On the daily leaderboards, you can often see high-ranking people sporting considerable amounts of schwag points, obtained through the means of some kind of "break", as well as many cheaters forging their bonuses as much as the integer limits allow them to.

The game computes the schwag bonus on every engine update, plus once more before showing the final score from a daily run, and it's defined as follows:

You can easily see how Schwag usually caps at 5,452 when not considering the PickupBonus.

Every time you collect a pickup that is used in the formula above (HP containers, any kind of heart, coins, bombs, keys and batteries) another value is computed: this value is uncapped and can reach the limits of a signed integer, and keeps the tally of everything you've picked up so far. Every consumable has its own value:

Once this value is computed, the game will obtain a "final pickup bonus" to add to the formula above and return the definitive amount of Schwag:

In short, the game is taking the uncapped tally of all the pickups and computing a capped value out of it to somewhat limit the Schwag bonus by taking a 2% off at every iteration; that's the reason why Schwag bonus doesn't get much higher after a certain threshold. At around 34,500 pickup points Schwag will cap and no longer increase because $i (which is used to multiply the bonus) will only lead to a 0.1% increase on the total bonus (* 0.001), completely worthless and offset by both the time and item penalties munching at your points.

Hush. Restarting the floor will clear the flag; therefore, it's not possible to obtain multiple bonuses — the maximum amount of obtainable points is fixed to 9,999 when clearing both events.

A 4,000 points bonus awarded for killing either

The Lamb in a daily run. Restarting the floor by any mean will not allow the player to obtain multiple bonuses. Only one of the two bonuses is obtainable, for there are no ways to reach

A 6,666 points bonus awarded to players after killing

Mega Satan in a daily run (Sunday only, unless curated). Restarting the floor by any means will not allow the player to obtain multiple bonuses.

Damage penalty is the amount of lost points for suffering damage in a daily run. Its formula is defined as follows:

Being tied to the exploration bonus, it means that getting hit once in the whole run bears different weights depending on how much you kill and explore:

The same hit will come with a progressively heftier price the more rooms you explore and clear, and the more enemies you kill. Assuming the same number of hits and rooms explored, it doesn't matter if the hit happened in chapter 1 or chapter 4.

Some kind of hits count as twice the damage, ie: when getting hit by a Champion, walking on Spikes or otherwise losing a full heart by harm.

Not all forms of damage will add to the damage penalty, there are, in fact, many exceptions:

Time penalty is how many points you lose in a run for spending time clearing floors, and it varies according to the events you've cleared throughout the run.

The formula(s) behind time penalty are as follows:

And, in turn BaseStagePenalty is the sum of several fixed amounts of points per each stage and event, called "Expected Stage Times":

* from killing Satan / Isaac in stage 10

Forget Me Now or a 5-pips

Dice Room will not alter those values.

Item penalty is the amount of points lost for collecting items throughout the run. As far as the game is concerned, an item can be both a collectible (actives, passives) or a pickup (anything making up the Schwag bonus).

The formula is as follows:

where Ending is a "game ending status":

In short, the game rewards you for going further with as little as possible. Item penalty has an upper bound to ~80% of the Schwag bonus. Schwag bonus has a high impact on the Item penalty.

Curiously, quitting the run in the Void grants a slightly higher item penalty, as Ending will be set to "Game Over" (1), meaning the Item penalty will only be divided by 2.5.