Binding of Isaac: Rebirth Wiki
Register
Don't have an account?
Sign In
Advertisement
in: Modified in Repentance, Modified in Afterbirth+, Bosses,
and 7 more
English 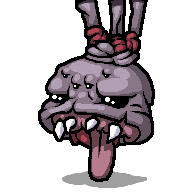 This article is about the boss. For the item, see Daddy Longlegs.

Daddy Long Legs is a boss that can appear:

Daddy Long Legs' head hangs down stationary and can perform the following attacks: