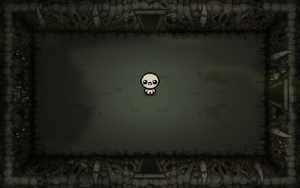 The Corpse is a new floor added in The Binding of Isaac: Repentance, which acts as

The Womb's alternative floor. It features a desolate and dreary atmosphere with enemies that carry the theme of death and rot.

To access The Corpse, the player must first open the flesh door at the end of the Mausoleum/Gehenna II after defeating the Mausoleum version of Mom by doing one of the following:

The boss of Corpse II is always Mother.