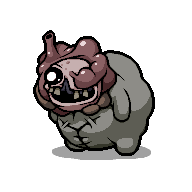 Chimera is a boss added in The Binding of Isaac: Repentance that can appear in the

Chimera trots quickly in Isaac's direction, slowly building up speed. When fast enough, it leaves a trail of harmful Green Creep and makes wide turns due to its momentum. It can also perform the following attacks:

Once its HP has dropped to about half, it makes a final charge towards Isaac before tripping and dividing the head and body into separate entities. It will take increasingly reduced damage as it approaches 50% HP until it transitions phases.