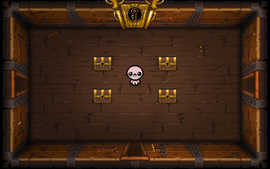 This article is about the floor. For the object, see Chests. For other uses, see Chest (Disambiguation).

The Chest is one of five final levels in The Binding of Isaac, alongside the

The Chest can be accessed with three methods: Touching the chest dropped by

The Polaroid (always dropped by

Mom after beating Isaac five times) equipped, or, while in the

Cathedral, by using Telepills or another item that acts like Telepills, and being sent to the I AM ERROR room, or finding a black market on the Cathedral and going into the beam of light.

Like the Cathedral before it, the Chest consists of only one floor. In the Chest, it is not possible to bomb doors open to skip rooms. The Chest's rooms are mainly filled with bosses and mini-bosses. The boss of the floor is always

The first room in the Chest will automatically contain 4 golden chests. These special chests always contain treasure room items. Rarely, these chests can also be Mega Chests. Additionally, all brown and golden chests spawned in the Chest will always contain Treasure Room Items. This means that a lot of different items can be found in the Chest when clearing rooms with items or effects that raise the chance of spawning chests. This can be useful when trying to complete the collection page.

Destroying Slot Machines, Fortune Telling Machines, and all types of Beggars with the exception of a Shell Game Beggar will also spawn items.

After completing the Chest or the Dark Room for the first time, the first room of the Chest will always contain a large golden door, which can be unlocked with either the Key Pieces (combination of

Get out of Jail Free Card, or