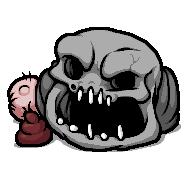 Carrion Queen is a boss that can appear in the

Carrion Queen is only vulnerable in the flesh segment of her behind. She moves randomly around the room in cardinal directions and can perform the following attacks:

Carrion Queen deals a whole heart of contact damage in both phases.

Hearts instead of Red Poop. The hearts have 28 HP and killing them deals 40 damage to Carrion Queen. She does not bounce diagonally around the room when below half health.