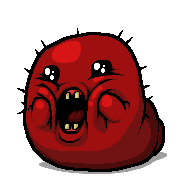 C.H.A.D. is a boss that can appear in the

C.H.A.D. moves randomly around the room in cardinal directions and can perform the following attacks:

PS4 Vita Even though C.H.A.D is unlocked by accomplishing "Something Cute", its PSN Trophy icon features Chub.