Binding of Isaac: Rebirth Wiki
Register
Don't have an account?
Sign In
Advertisement
in: Added in Repentance, Bosses, Chapter 2 Bosses,
and 4 more
English 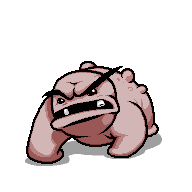 Bumbino is a boss added in The Binding of Isaac: Repentance that can appear in all environments of Chapter 2 (

Bumbino slowly moves towards Isaac and can perform the following attacks:

All of Bumbino's attacks deal 1 Heart of damage.

Additionally, Bumbino attempts to pick up any dropped Coins, similar to

Ultra Greed, but without the healing.