Binding of Isaac: Rebirth Wiki
Register
Don't have an account?
Sign In
Advertisement
in: Modified in Afterbirth+, Added in Afterbirth, Bosses,
and 9 more
English 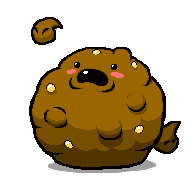 Brownie is a boss added in The Binding of Isaac: Afterbirth that can appear in all environments of Chapter 3 (

Brownie's expression when idle changes as he gets damaged by Isaac - going from happy to grumpy. This appears to have a correlation with how aggressive he is in performing attacks, chaining attacks, and how many corny projectiles are released in his attacks.

and his corny projectiles) are also black. Brownie still leaves Green Creep when poisoned. When at low health, he becomes 2

Dank Squirts instead of a weakened Dangle.