This article is about the Afterbirth † Bestiary. For the Repentance Bestiary, see Bestiary Repentance. 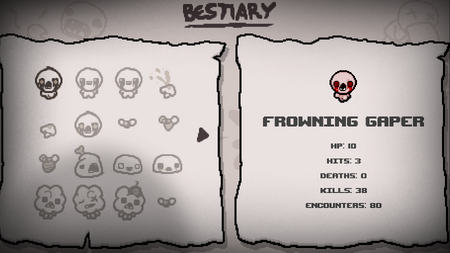 The bestiary is a new addition to The Binding of Isaac: Afterbirth † that is accessible through the "Stats" menu. The Bestiary shows information and statistics on all encountered monsters and bosses except for some alternate forms of some enemies.

These are the monsters on each of the bestiary's pages

(Click on the images to open the corresponding monster page.)