Binding of Isaac: Rebirth Wiki
Register
Don't have an account?
Sign In
Advertisement
in: Added in Repentance, Bosses, Bugs,
and 5 more
English 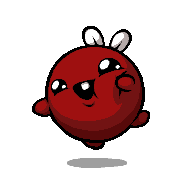 Baby Plum is a boss added in The Binding of Isaac: Repentance that can appear in all environments of Chapter 1 (

Baby Plum floats slowly towards Isaac and attempts to orbit a certain distance around her; she will not break this distance unless she performs an attack with a movement ability. While chasing Isaac she also performs the following attacks:

If Baby Plum doesn't take damage for 30 seconds, she will wave at the screen before flying away. The Boss Room item that spawns when the room is cleared will also be replaced by