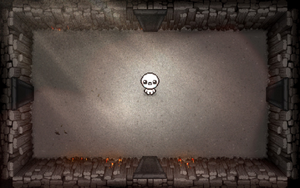 Defeat all bosses in the Mines

Ashpit is an alternative floor to the

Mines. The floor can be accessed by using bombs on the Exit Door of

Flooded Caves I / II or

Catacombs I / II. Ashpit's theme is centred around mainly skeletons, flames, dust and ghosts, and contains a blowing dust overlay.

The Ashpit is significantly more difficult than their standard counterparts, filled with stone and fire-themed enemies that boast greater health and aggression. Most blocks are rocks or spiked rocks, and poops are almost non-existent. Tinted rocks have a high chance of spawning tinted rock spiders. Travelling through it is only advised if you have already acquired

Knife Piece 1 in the

Knife Piece 1, a special double-sized room will spawn in Ashpit II containing a minecart and a broken length of rail track leading to a boarded up door, just like those that lead to a Bedroom. Behind this door lies the area in which

Knife Piece 2 can be acquired. There are two methods for accessing this area:

Upon entering this area, all passive and active items will be rendered inactive, and your bombs, coins, and keys will be set to zero. New pickups can still be obtained, however, and will persist after Isaac leaves the area. You will pass through several empty rooms before reaching a room with the

Knife Piece 2. Once you pick it up, Mother's Shadow will spawn and your race back to the entrance begins. This enemy cannot be defeated by any means, and escape is your only option.

Unlike your initial trip to reach the

Knife Piece 2, the path back will be obstructed by rocks and poops. While flying characters can handle all of this with ease, walking characters will have a significantly harder time. Using your tears and the conveniently-located throwable bombs, you will need to break through the obstructions, press buttons, and grab keys for key blocks to make it back to the main dungeon. Making it out taking little or no damage is possible, particularly if you are fast and accustomed to dodging the shadow's attacks. Once you escape, all your items will be reactivated, and the shadow will end its pursuit.