Binding of Isaac: Rebirth Wiki
Register
Don't have an account?
Sign In
Advertisement
in: Modified in Repentance, Modified in Afterbirth+, Bosses,
and 4 more
English 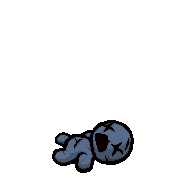 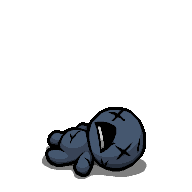 This article is about the boss at the end of The Chest. For the character, see ??? (Character). For other uses, see ??? (Disambiguation).

The Polaroid, which is always dropped by

Mom after defeating Isaac five times. He is a posthumous version of Isaac, and the final boss of Ending 14.

??? lies on the ground in the middle of the room and does not begin attacking until he takes damage.
During all three of ???'s phases, he performs similar attacks to Isaac, but at a faster pace. He also shoots multiple projectiles in the player’s direction at fixed intervals. After taking enough damage, he begins to shoot double and triple projectiles.

??? remains stationary on the ground and performs the following attacks:

Eternal Flies that can block tears begin to circle ???, who stands up but remains stationary and performs the following attacks:

??? grows a pair of angelic wings and is no longer stationary, slowing drifting towards Isaac and performing the following attacks: